The Villa Heights Community Organization works together with local residents and businesses to release a quarterly community newsletter. You can pick them up at the monthly VHCO meeting or check them out at any of the six Little Free Libraries throughout the neighborhood. You can also download the PDF by clicking on the link below: 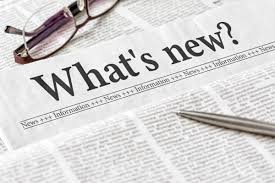 A team of developers plan to transform the historic Parkwood Avenue Associate Reformed Presbyterian (A.R.P.) Church of Villa Heights into apartments while preserving the distinctive church building. Eid Refaey, a real estate developer who has worked in Villa Heights since 2003, currently owns the property, and he is working with Paul Pennell, a landscape architect and civil engineer at Urban Design Partners, to convert the church into a number of apartments, according to Mr. Pennell’s presentation at the Villa Heights Community Meeting on July 9, 2018.

Opened in 1929, the church was designed by Louis Asbury, one of Charlotte’s celebrated pre-World War II architects inspired by Neoclassical and Gothic design. Featuring an impressive use of brick for a 1920s revivalist style and numerous stained-glass windows, the church has been considered Villa Heights’ most distinctive building. It continued to serve as place of worship owned by the A.R.P. until 1968 when the building was purchased for use by the Institutional Christian Methodist Episcopal (C.M.E.) Church. According to a recent historical survey, this transfer in ownership reflected the changing demographics of Villa Heights in the mid-century period as Villa Heights became a growing community for middle-class African American families. Following the construction of a new sanctuary on Tom Hunter Road in 2000, the Parkwood Institutional C.M.E. congregation used the church in Villa Heights as a satellite site until 2015.

According to Mr. Pennell and Mr. Refaey, the church will be transformed into sixteen to twenty residential units, and they intend to alter the exterior of the building as little as possible. At the moment, the anticipated changes to the exterior will primarily be for the sake of meeting the safety and health codes required by the city of buildings zoned for urban residential use. The stained glass windows of the church will removed, but Mr. Refaey intends to commission artists to repurpose the glass for onsite art installations.

The developers also plan to construct three duplexes that will complement the architecture of the historic church. Between the apartment units and duplexes, the developers anticipate twenty-two to twenty-four new residential units, ranging from studios to three-bedroom residences. Accompanying the residential units will be more than fifty parking spaces on the property itself. Mr. Pennell noted that this would be sufficient for future residents of the proposed development and that there would be no need for street parking.

The developers will present their plans and their petition for rezoning to city council on July 18th, and, assuming that all permits are approved, the developers anticipate breaking ground on this project in spring or summer of 2019.

As residents of Villa Heights see on a daily basis, most residential development projects in the neighborhood have resulted in the leveling of older buildings and the construction of entirely new single-family homes and multistory apartment complexes. If Mr. Refaey and Mr. Pennell are successful in the plan they presented on July 9, the transformation of Parkwood Reformed Presbyterian Church offers an alternative form of development and growth—one that attempts to preserve neighborhood history while continuing to reshape Villa Heights for future residents.

Article by Will Sherman for the VHCO. July 2018.

*For more information on the history of the church, consult the 2017 survey prepared by Dr. Dan Morrill and Stewart Gray for Charlotte-Mecklenburg Historic Landmarks Commission: http://landmarkscommission.org/wp-content/uploads/2017/07/Parkwood-ARP-SR.pdf

For more information on this rezoning petition (2018-060) or to track the status, consult the City of Charlotte Planning, Design, & Development page: http://charlottenc.gov/planning/Rezoning/RezoningPetitions/2018Petitions/Pages/2018-060.aspx Today I took a walk on the Greenway in Cordelia Park.  I was so pleased with the improvements that Mecklenburg Park and Rec is making in the park.  First, I noticed that work is proceeding with the new pavilion.  This is going to be a great place for community meetings and events. 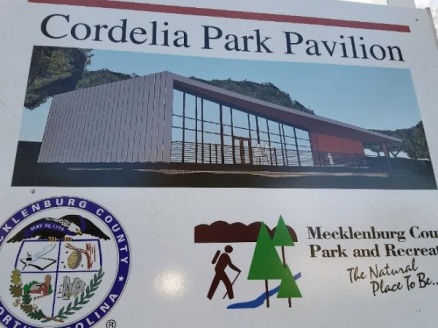 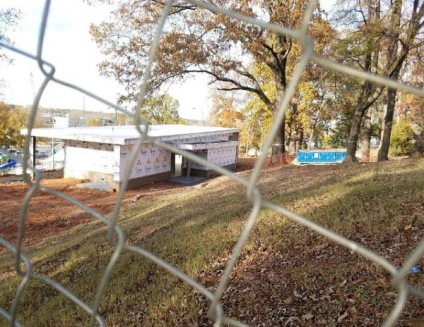 Then I noticed that two trees had been planted by each of the two benches that are in full sun.  Thanks go to Trees Charlotte for donating the trees, and Tim Turton with Parks and Rec for planting the trees. 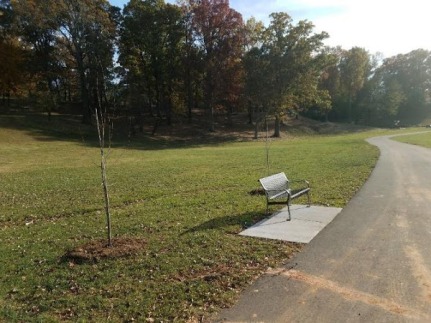 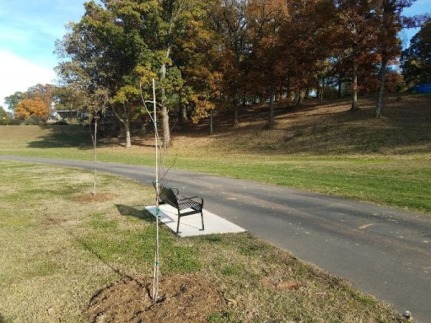 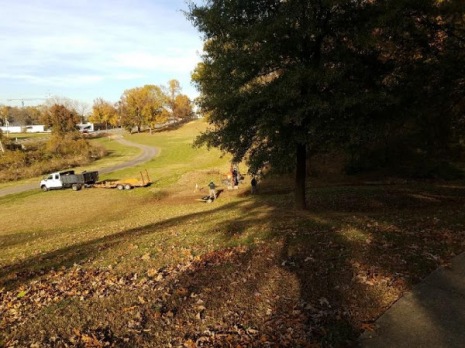 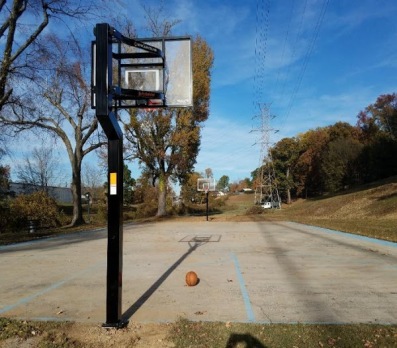 The last things I noticed was a number of trees (cedars and hardwoods) had been planted at the entrances to the park at the Harrill Street entrance and 24th Street. 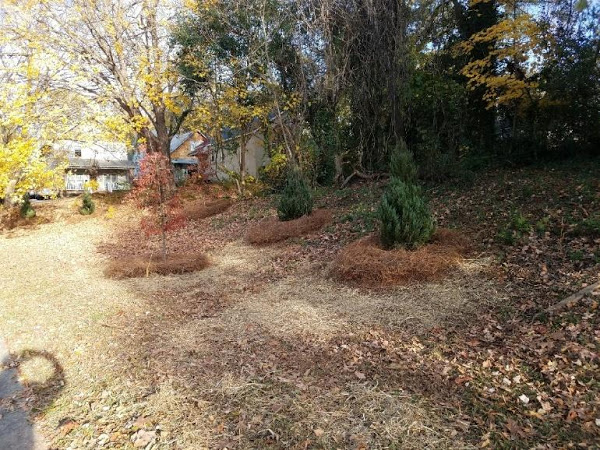 Way to go, Mecklenburg Park and Rec!  It’s looking good, and I think the rebuilding of the playground is next on the list.

10/29/17:
For the last few months, a topic of conversation at VHCO monthly meetings has been adding a mural in Cordelia Park. A local artist, Hilary Siber, has graciously volunteered to donate her time to enhancing our neighborhood with a mural! We’ve had to nail down some details, but are well on our way! Here’s the latest and greatest:

James Williams (Park and Rec), Gwen Cook (Greenway Planner), Hilary Siber (Artist), and Max Carroll (VHCO Ways and Means Chair) met Friday, Oct. 20, 2017, to make sure all were in agreement on the mural, and they discussed its location. James and Gwen gave their unqualified support for the project. Everyone agreed that the slope of the Greenway walkway from the bench near the basketball court downward toward the Parkwood tunnel would be an ideal place for the mural, because there would be traffic from the trail, as well as from the pedestrian bridge. The mural would be painted directly onto the sidewalk.

The design was offered up by the artist, and it has been approved and discussed over the last few months at recent VHCO meetings. Generally, the design pays homage to the Little Sugar Creek it will run beside (water/fish theme) with a background of our local neighborhood street lines. See picture below! Please note: the rendering below is from when the mural was designed to go in the tunnel under Parkwood – due to moisture concerns, that plan has been changed to the walkway as discussed above. However, the generallook/theme will remain the same, despite some small edits to accommodate walkway location.

With all these positive decisions in place, we need your help, neighbors!

Hilary is donating her time, but we need to pay for the paint and other supplies, and need to raise those funds before she can start the project. No amount is too small! Your donations are tax deductible and can made through Venmo (villaheights@gmail.com) or checks made payable to and mailed to Villa Heights Community Organization, P. O. Box 5015, Charlotte, NC 28205. Please identify the donations as being for the mural. All volunteer hours and donations in kind will count toward the neighborhood obligation of the bench neighborhood matching grant.

This is an amazing opportunity to further enhance our neighborhood – please consider making a donation!!! 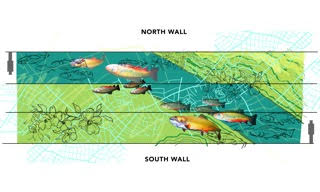 Hello Neighbors and welcome to our website!  We are very excited to have a place where we can share information to our Villa Heights neighbors, as well as to the City of Charlotte.  This website was completed using a Neighborhood Matching Grant (more info here).

We have broken up the website into sections – About Villa Heights, Residents, Organization, Cordelia Park, and Blog.

About Villa Heights is a look at the neighborhood, past and present.  The About page gives you more information about our present day and the History page takes a glimpse into the past.

Residents located tools and information for our neighbors.  A welcome page for new residents, as well as information about how to get involved.

Organization has a wealth of information about our community organization.

Cordelia Park is a unique attraction to Villa Heights and we are very proud of it!  Learn more about the community garden, pool, and new trail!

Finally, we obviously have our blog which we will update regularly with updates and events going on in our neighborhood.

If you have any comments or questions, please email villaheights@gmail.com.